Here is my first post related to Regulatory Affairs!

What is Regulatory Affairs? 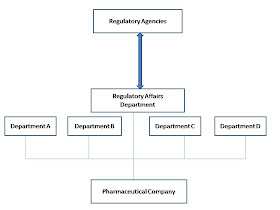 In the above presentation, I am conveying the fact that -among all the departments of a pharma company Regulatory Affairs Department acts as the interface between  the pharmaceutical company and the regulatory agencies across the world.
Regulatory agency in the present context may be defined as "The competent government agency which is responsible for ensuring that medicines work and are acceptably safe."


Note: Apart from the above work profile there may be other responsibilities for Regulatory Affairs professionals too.


You may be wondering what the abbreviations NDA,ANDA, CEP etc are all about..????